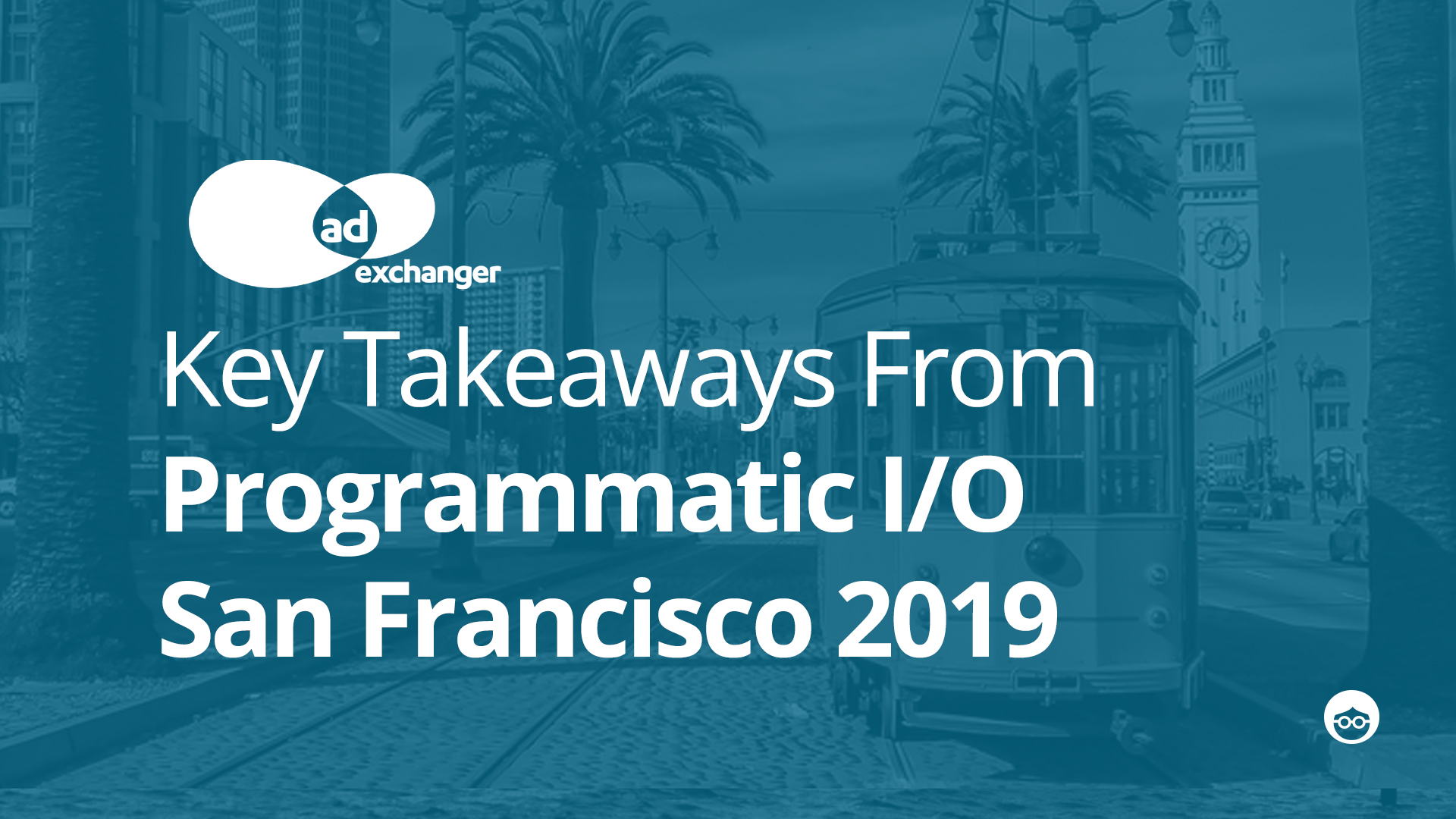 AdExchanger’s Programmatic I/O, which touts itself as the world’s largest conference focused on programmatic media and marketing, took place this past week in San Francisco. And with over 65 speakers, multiple stages and roughly 1,200 attendees, there was no shortage of discussions around DSPs, SSPs, DMPs, CDPs, RTB, OTT and a host of other industry acronyms.

For those who couldn’t attend but want an insider’s look into what was shared, here are just a few of the major takeaways from the conference.

Programmatic is Growing… and Native is leading the way!

Programmatic buying, simply stated, is the automated process of buying and selling advertising achieved through a variety of platforms and exchanges that enable brands and agencies (“demand”) to purchase ad inventory from publishers and content providers (“supply”) in real time.

To say that programmatic advertising is already big is an understatement, as it represented about $49 billion of digital ad spend in 2018. By the end of 2019, it is estimated that almost 85% of all digital display dollars – or $59 billion – will transact programmatically in 2019, and that will continue to rise, with 74% of ad agencies reporting that they plan to further increase their investments in programmatic this year, as presented on stage by Lauren Fisher, Principal Analyst at eMarketer. By 2021, an estimated $81 billion will be spent programmatically.

While display ads often come to mind when discussing programmatic buying, digital video represents an increasing percentage of the overall business. According to eMarketer, four out of every five video ad dollars are being spent programmatically.

Digital video, of course, is no longer limited to those pre-roll ads that we’re forced to sit through, or ignore, before the content for which we came starts playing. Social in-feed video, native video, and outstream video, that play within their own dedicated player, are formats on the rise that will have an increasing presence in the programmatic ecosystem.

Beyond desktop and mobile devices, programmatic video is also making its way to over-the-top (OTT) streaming services that you watch on your TV, like Hulu, and connected TVs (CTV).  You can expect to see more of these TV ads targeted to you over the coming years because while consumers are spending 15% of all TV viewing time on CTVs, only 4% of TV spend is going towards this format.

All video formats combined, programmatic video is projected to account for half of all programmatic spend by 2021, or $40 billion dollars.

In-Housing is on the Rise, but Agencies Still Rule the Day

Historically, big brands (think P&G, Coca-Cola, etc.) have relied on traditional agencies to manage their marketing needs – from creative, to strategy, to media buying.  With the rise of programmatic – which provides a broad range of automated buying, audience targeting, and campaign measurement capabilities previously that was once the domain of agencies – advertisers are increasingly taking media buying in-house.

Brands including Uber, HP, Williams-Sonoma, and Draft Kings appeared at Programmatic I/O to share their experience, their successes, and the inevitable challenges in their programmatic in-housing efforts. But agencies are far from a dying breed, even in the age of programmatic.

As presented by Kevin Mannion, Chief Strategy Officer of consulting firm Advertiser Perceptions, only 14% of major brands they surveyed do all of their programmatic media buying internally.  On the other hand, 23% of brands still rely entirely on agencies to purchase their media programmatically, while 63% combine work with both agencies and programmatic ad tech partners.

All in all, AdExchanger’s Programmatic I/O is the place to be for all-things programmatic. Native programmatic is on the rise, video and connected TV are the latest trends, and agencies are still ruling the platform.

If we didn’t get to meet in San Francisco, we hope to see you at Programmatic I/O in New York later this year! And if you’re interested in learning more about Outbrain’s programmatic (or combined video) offering? Feel free to drop us a line – we’d love to chat.